As we celebrate Constitution Day of India today (India adopted the Constitution on November 26, 1949), let us look at how important property rights are to us.(Wikimedia)

The right to own property was a fundamental right according to the original draft of the Indian constitution. However, there were provisions that allowed confiscation of property, if the government found it reasonable. For example, the government could confiscate property to avoid concentration of wealth. Through amendments made over time, the right to property remains a constitutional right today.

As we celebrate Constitution Day of India today (India adopted the Constitution on November 26, 1949), let us look at how important property rights are to us.

In a country where urban land is scarce, there are many ways in which homes can be made affordable:

While India's track record in these two aspects may not be strong, property rights have also played a role in keeping homes in India pricey.

George Mason University economics professor Alex Tabarrok points out that if private real estate developers were allowed to own large tracts of land, they would have built city-wide infrastructure. DLF, Tabarrok points out, is not likely to dump sewage in property owned by Ansals, another private developer. For this to happen, it should be easier to convert agricultural land into non-agricultural land. Mixed land use should be allowed more easily. 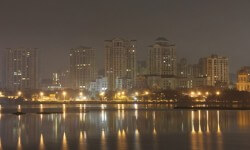