Many complex factors have been responsible for Indian cities' poor infrastructure. To begin with, many still believe that India's soul lies in its villages. But once three-fourths of the country's people, indeed, lived in its villages. And agriculture accounted for half of India's gross domestic product (GDP). Planners felt that economists had an urban bias. Much of urban planning in India was intended to empty out city cores. So, while planners tried to develop remote areas and smaller towns, they did not build enough infrastructure in dense urban areas.

Indian planners place undue emphasis on spending as little as possible on infrastructure, even as many researchers have pointed out that every Rs 1,000 spent on infrastructure will create a value worth tens of lakhs of rupees, if done in the right place and manner.

Building infrastructure is expensive, especially if it is done over very long distances. Doing so in the heart of the city is costly, but there are many people who are going to share this infrastructure. People migrate from rural areas to metropolises to share the infrastructure and amenities in the centre of cities. Even though much of India still lives in rural areas, it is more ethical to invest in urban infrastructure. There is great demand for infrastructure built in, say, Delhi's Connaught Place or Mumbai's Nariman Point. The urban poor benefit more from this, because cities disproportionately attract poor people. If the same infrastructure was built in a remote village in Himachal Pradesh, not many people would use it.

In the centre of Indian cities like Delhi and Mumbai, buildings are often dilapidated; infrastructure is in a poor condition. Authorities assume — without good reason — that it is not possible to improve central city infrastructure. They do not allow tall buildings in city cores because the infrastructure is not equipped to handle high densities.

For example, if buildings in Connaught Place were 50 storeys tall, more people might walk or drive through the roads. If the road infrastructure is not equipped to handle such traffic, it is dangerous to allow such tall buildings. However, there is no reason to believe that it is impossible to upgrade the infrastructure. Metropolises across the world have done that. Tall buildings have not made major cities more crowded than Mumbai or Delhi, even though these cities are denser in the centre. It would have been easy for urban local authorities to fund infrastructure by charging real estate developers for building tall.

The government has also tried to improve the lives of the urban poor by building houses and bathrooms. But people who live in slums and informal settlements usually have other needs that are more important. They need more job opportunities and better infrastructure. As it is cheaper for government contractors to build houses in the suburbs or peripheries, measures to build houses for the poor ignore their deeper needs. As American academic World Michael Cohen pointed out, the Indian government is "entering the city through the 'housing and the bathroom' rather than through the place of work and the market".

Government regulations make it very difficult for developers to acquire large tracts of land or convert land from agricultural use to commercial or residential use. For long, the government also placed an upper limit of 500 square metres on land that private citizens could own in urban areas. Such regulations make it difficult for private corporations to build infrastructure by combining smaller parcels of land. The Rapid Metro in Gurgaon, for example, largely connects DLF's properties. Even though DLF pulled out of the deal later, this is India's first privately financed Metro. If such regulations were not too stringent, we would have seen more such privately funded infrastructure.

Moreover, in Indian cities, mayors are powerless. This is not true of major global cities like New York or Paris, where cities are more autonomous. Even countries like Hong Kong or Singapore that have relatively good infrastructure and relatively successful public housing projects are, fundamentally, cities. As mayors in Indian cities lack autonomy, they are unable to reform these cities. 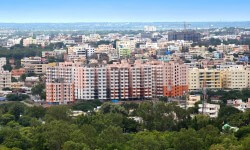 Why Hyderabad Is An Affordable Metropolis