Property prices in Mumbai have increased one per cent in the past one year. (Wikipedia)

India's real estate markets will soon be in better shape with the number of new launches likely to rise soon. But, in the recent past, this has not been the case, though that hasn't led to any decline in prices of real estate projects in India.

In the past few years, home buyers have been waiting for the economy to completely recover from the economic slowdown. As real estate developers were betting on home sales to repay their debts and launch new projects, their plans did not fall through with buyers' reluctance to invest in a slow market. Developers had to curtail their expansion plans by cutting down on the number of new launches.

Real estate developers have found their cost of borrowing going up in the recent past. The rising debt left many developers to undertake joint ventures, liquidate their assets or leave businesses altogether. Moreover, value of the Indian Rupee has been falling - it fell to a two-year low as recently as in August. This raised the cost of borrowing from abroad. As a result, Thane was the only city which saw a rise in the number of launches.

The Lone Exception
Thane witnessed growth in number of new project launches. One of the key reasons is that many IT and IT-enabled services firms have been shifting their offices to Thane and Navi Mumbai in the recent past. The price of real estate in Thane is expected to appreciate further because it is also closer to many IT parks in Navi Mumbai. Thane is also well-connected to Navi Mumbai through roadways and the ---Panvel rail network.

Modest Decline
The drop in sales in the past one quarter has been modest, though, by 18 per cent. As the Q1 report points out, this is primarily because of a decline in the number of new launches, and not because the existing projects were performing poorly. For instance, the drop in the sales of existing projects when compared to the previous quarter was merely 11 per cent, while the drop in the sales of new projects was 30 per cent. This means that the decline in demand is not as steep as it is believed. In the past one year, sales declined by 45 per cent, and the year prior to that, sales declined by 31 per cent.

Delays in construction is a major factor that have kept investors and home buyers away from under-construction projects. The time-consuming nature of the process to get necessary approvals from the Government have been limiting factors, too. Home buyers in general have also been wary of projects that might become stalled or delayed due to litigation or developers being denied access to cheap credit.

Inventory overhang is the highest in the National Capital Region (NCR) of Delhi, Mumbai and Hyderabad, with the quality of inventory being the best in Pune. Inventory older than three years has risen to 18 per cent with Noida leading the list with the highest percentage of inventory that's over three years old, at 31 per cent. A good 52 per cent of the unsold inventory happens to be in the affordable homes segment, with Noida accounting for most homes in the affordable category as unsold inventory.

Investor's Favorites
As real estate investors think that price of property in Bhiwadi, Sohna and Navi Mumbai will appreciate, these are the only three areas where investors make up more than 25 per cent of the total demand. These areas are widely considered as the investment hotspots. In the other cities, over three quarters of the demand come from end users. But, stagnation in residential real estate prices and delays in project completion have made investors wary.

Interest rates are high in India, while residential rental yield is unusually low, and this are limiting factors, too, for investors to put their money in projects. When prices are stagnant and not surging, investors also feel that they do not have much of an incentive. However, this does not deter home buyers much.

Consistent Prices & The Road Ahead
The greatest appreciation in property rates has happened in Mumbai at six per cent in the first quarter. The Yamuna way and Bengaluru have the same rate of price appreciation (six per cent). This means that, overall, prices have been stagnant.

While real estate investors and buyers are waiting for reduction in prices, developers hope the demand for homes rise and government policies improve soon. Even as the expectations continue, the Q1 report predicts that the prices are not likely to fall in the near future. “The launches might pick up in October, when the festive season begins. Further cuts in home loan rates might also help,” says PropTiger.com's Chief Executive Officer Dhruv Agarwala.

The Real Estate Regulatory Bill is also being considered by the Government in the Monsoon Session of Parliament, though industry watchers predict that it is not likely to be passed any time soon. The Government also wants to reform the rental laws. This is of great significance because rental yield in India is much lower than that of other nations. The Reserve Bank of India reduced the repo rate by 25 basis points for the third time in June this year, and is expected to consider another rate cut very soon. These could revive buyers sentiment in the real estate market in India, improving sales, even though marginally, in the second quarter, with prices remaining stable.

What's The Big Fuss About The Real Estate Regulatory Bill? #Budget2017: FDI Norms May Be Eased Later This Year 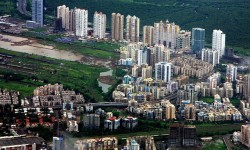