In  a major push to revive the construction sector, the National Highways Authority of India (NHAI) will release Rs 6,000 crore for developers stuck in litigation. The move will help banks recover bad loans while also providing funds for stalled projects. Earlier, the government had asked its departments and ministries to release 75 per cent of disputed amount in cases, where a developer or a concessionaire has won an arbitration case.

The Delhi International Airport Limited plans to construct a hotel close to Terminal-3. The authority has sought contract for the country's first airport terminal hotel that will be open to all. Hotel chains like Hilton Worldwide said they would be interested in bidding for the new airport hotel.

After clearing around seven-acre land from encroachers in the last one week, the Haryana Urban Development Authority (HUDA) plans to set up a separate wing for anti-encroachment drive to release land worth Rs 5,000 crore from encroachers in Gurgaon.

Bollywood actor Vivek Oberoi has announced the launch of affordable housing project at Shahapur in Maharashtra. The project, which would be undertaken by Karrm Infrastructure, where Oberoi is a promoter and a partner, would provide housing to more than 15,000 families at a cost of Rs 7,90,000/unit. The company plans to build 5,000 apartments within the next three to five years. 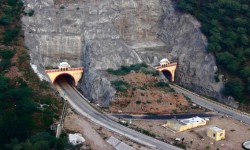