The corporate affairs ministry has directed the National Company Law Tribunal that homebuyers be treated as a sub-class in Committee of Creditors in cases where real estate developers are undergoing insolvency proceedings. The ministry has also asked the tribunal to have an outcome-based approach to resolve Jaypee Infratech case.

The Rajasthan Housing Board plans to launch luxury apartments for the high-income groups through public-private-partnership mode. These apartments are proposed to be constructed on a two-hectare land on the Aravali Path in Jaipur’s Mansarovar area. The board has already asked developers to submit proposals.

Prices of houses are expected to reduce by at least 10 per cent amid rising housing stock and financial burden on the developers, says a leading global real estate brokerage. Many developers are in huge debt as their funding avenues have dried up. To stay afloat in the market, they will have to double their current sales which can only be achieved by reducing prices, says the brokerage.

The Delhi Development Authority plans to start redevelopment work across six slums in the city. The six slums include the JJ clusters in Rohini’s sectors 18 and 19, Dilshad Garden, Kirti Nagar, Shalimar Bagh and Kusumpur Pahadi in Vasant Vihar. The authority will soon float tenders to hire consultants and prepare Detailed Project Reports. 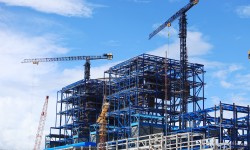