This Is Where India's Luckiest Home Buyers Live

The skyscrapers in Noida are green. (Wikimedia)

Real estate markets can be unpredictable at times. Fluctuations in real estate prices are not always easy to interpret. But, across India, there are some localities where prices have been rising substantially in the recent past, often because of improvements in infrastructure.

Here are seven localities where real estate prices have seen a rise in past two quarters, according to the Datalabs division of PropTiger.com. If you have bought a property in these areas in the recent past, you have a good reason to consider yourself lucky: 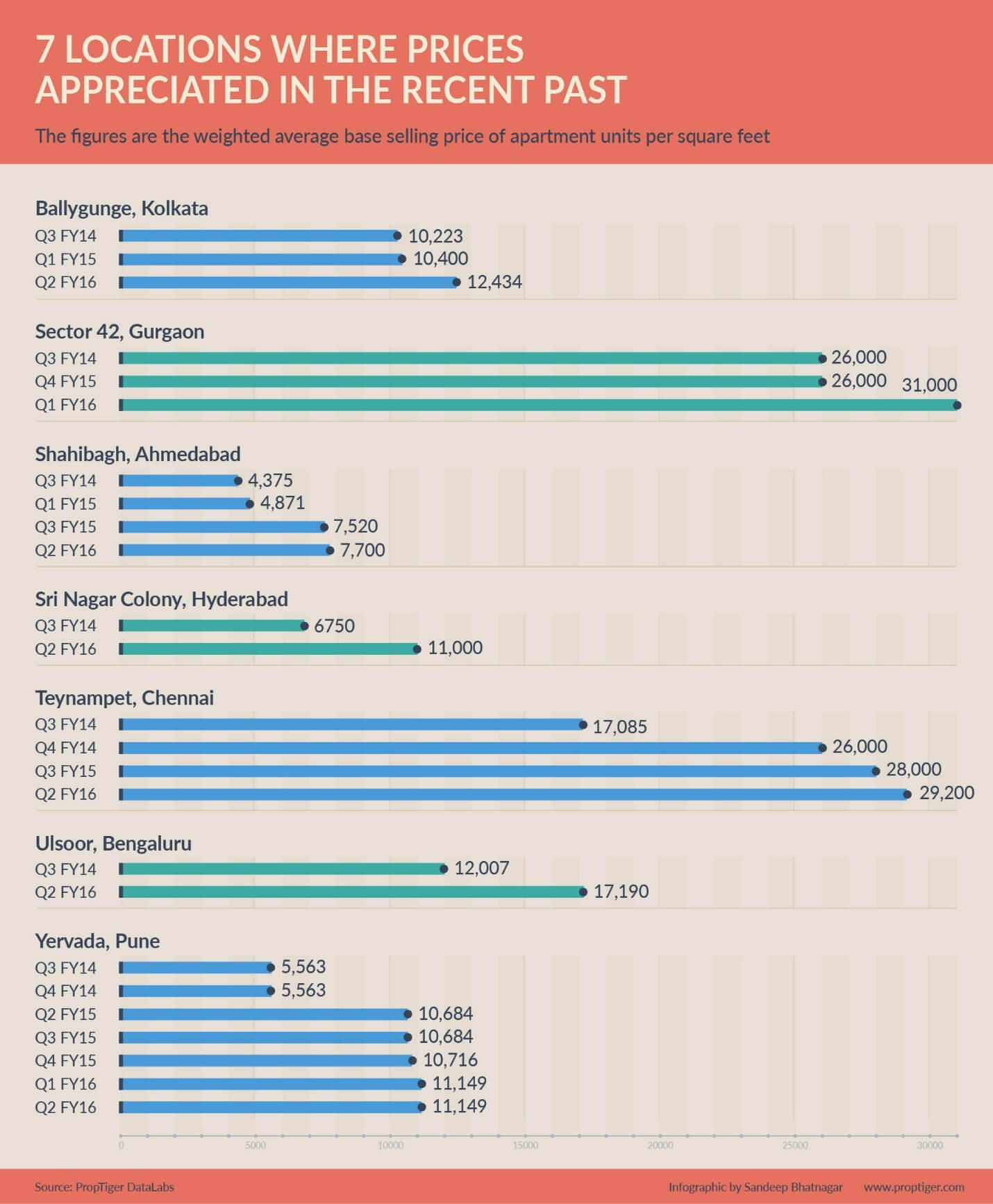 In Sector 42, Gurgaon, a predominantly residential area, apartment prices have significantly risen over the past three quarters. According to PropTiger Datalabs, in the fourth quarter of the financial year 2014-15 (Q4'15), the weighted average base selling price (Wt. avg. BSP) of apartments in Sector 42, Gurgaon was Rs 26,000 per sq ft. Weighted average base selling price is the average price of apartment units weighted on the number of BHK units. But, in the first quarter of the financial year 2015-16, the wt. avg. BSP went up to Rs 31,000 per sq ft, a rise of 16 per cent. One of the reasons why property prices went up was the completion of the 16-lane expressway built from Ambience Mall to Sector 42. Its proximity to City Phase-V, Golf Course Road, City Phase-I, s Valley View Estate and the - Road also makes apartments in Sector 42 valuable.

Ballygunge in Kolkata is one of the prime residential localities in India, as many high-net worth individuals (HNIs) live here. Some apartments in Ballygunge cost as high as Rs 8 crore or more. Ballygunge has a well developed infrastructure, with a good connectivity to other parts of the city. In the first quarter of the financial year 2015-16, the wt. avg. BSP of apartment in Ballygunge was Rs 10,400 per sq ft; it reached Rs 12,434 per sq ft in the second quarter of the financial year 2015-16. Property prices in Ballygunge have been rising consistently since 2007.

Yerwada, one of the densest localities in Pune, is well-connected to the Ahmednagar Highway and the Airport at Lohegaon. Golf Course, KPMG's back office and Ernst & Young's office are nearby. In Yerwada, prices remained stable in the last two quarters of financial year 2013-14 at a wt. avg. BSP of Rs 5,563 per sq ft. At Rs 10,694 per sq ft, property prices witnessed a sharp rise of about 87.6 per cent in the second quarter of financial year 2015. Prices continued to rise and stood at Rs 11,149 per sq ft at the end of second quarter of FY15-16.

Ahmedabad's Shahibaug is a locality with good social infrastructure. The Sabarmati riverfront is being developed along the banks of the river, and this is one of the reasons why prices appreciated in the recent past. In the first quarter of financial year 2015, the wt. avg. BSP of apartments in Shahibaug stood at Rs 4,871 per sq ft, followed by a steady rise throughout the year. By the end of second quarter of financial year 2016, the property prices had jumped to Rs 7700 per sq ft. With the riverfront still being developed, prices here are likely to rise further.

Ulsoor is a well-established locality in central Bengaluru. One of the reasons why price of real estate in Ulsoor soared is the arrival of metro lines, which decongested this part of the city. In the third quarter of FY13-14, the wt. avg. B of apartments in Ulsoor was Rs 12,007 per sq ft. It went up to Rs 17,190 per sq ft in the second quarter of the current financial year.

Teynampet, a busy commercial locality, is close to other prominent areas such as T Nagar and Nungumbakkam in Chennai. Real estate has been in demand for long in this micro market. and prices have risen substantially in the recent past. In third quarter of FY14, the wt. avg. BSP of apartment here was Rs 17,085 per sq ft, which has gone up to Rs 29,200 per sq ft in the second quarter of FY16. An underground metro station is expected to be constructed in Teynampet, which is one of the reasons why property prices here may rise further.