The Good and Services Tax (GST) Council has paved the way for rolling out the new tax regime from July this year. With this, India is ready to enact what is touted as the most ambitious tax reforms since Independence. The council, which met in national capital Delhi on March 16, approved the state GST (SGST) and the union territory GST (UTGST) Bills.

The Lok Sabha on March 14 passed the Enemy Property (Amendment and Validation) Bill, 2016. The law denies inheritance rights to the heirs of individuals, who left India for Pakistan and China after partition. The Rajya Sabha gave its assent to the long-pending legislation last week.

The government plans to amend the employee provident fund scheme. After the amendment in norms, around four crore members of the Employees' Provident Fund Organisation will be able to withdraw up to 90 per cent of their funds for making down payments while buying homes.

Following protests from consumer rights groups, the Maharashtra government is learnt to have plugged certain pro-developer clauses in its draft for the new Real Estate (Regulation & Development) Act (RERA) rules. The final rules, likely to be approved by Chief Minister Devendra Fadnavis soon, will come into effect on May 1. 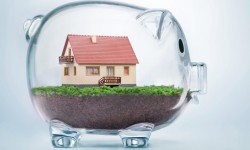 Should You Buy a Property Using Your PF Money?