11 Places In Delhi Where Heavy Traffic Always Tests Your Patience The traffic congestion on Delhi roads is bothering both common and not-so-common Delhiites.(Wikipedia)

Politicians being accused of 'horse trading' is not something that is unheard-of in India. But a politician resorting to 'horse riding' to go to work was a sight to behold in Delhi. Even as the second phase of the odd-even road space rationing in the city approaches its end, Chief Minister Arvind Kejriwal's pet scheme is testing the tempers of many.

On April 28, Ram Prasad Sharma, a Bharatiya Janata Party Member of Parliament (MP) from Tezpur, Assam, rode a horse to the House to mark his protest. Similarly, MP from Northeast Delhi Manoj Tiwari used a bicycle to reach Parliament.

While Kejriwal is being criticised for implementing a policy that has apparently made the life of the common man difficult, the not-so-common in Delhi have been quite vocal in opposing the move. But Kejriwal is not the only one desperately trying to implement measures to let the choking lanes of Delhi breathe easy. A panel constituted by the Union urban development ministry recently came up with suggestions to achieve the same target. The National Highways Authority of India, too, is doing a planning of its own to decongest Delhi's roads.

At a time when the central and state governments, as well as civic bodies, are trying hard to tackle Delhi's traffic issues, PropGuide lists 11 spots across Delhi where you are more likely to find yourself gasping with frustration while trying to drive through congestion: 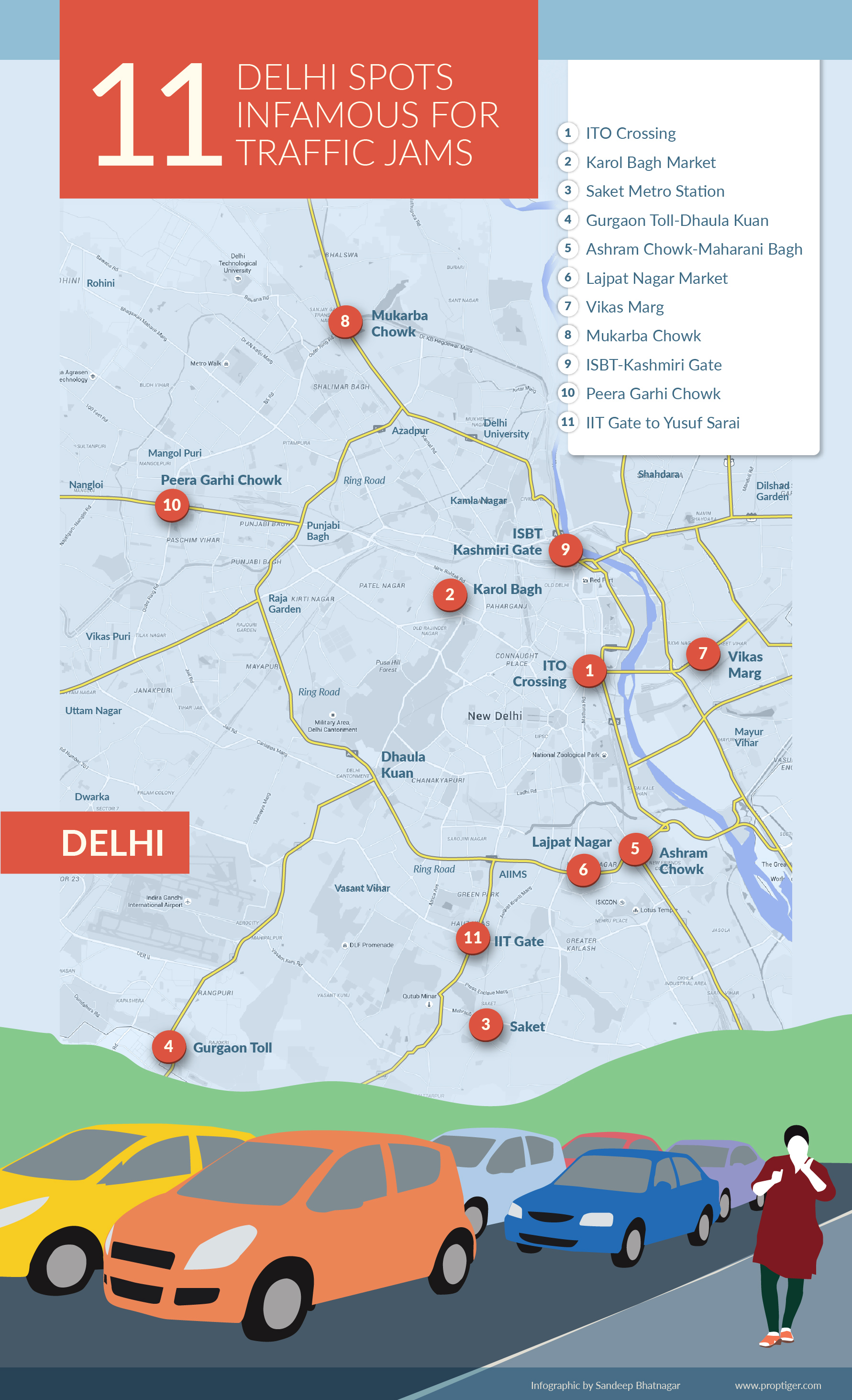 One of the busiest intersections in central Delhi, ITO Crossing sees mammoth traffic movement every day, for it carries vehicular traffic from Central Delhi to East Delhi, and vice versa. The area, housing the offices of many government departments and leading newspapers, has seen more traffic jams in the recent past, thanks to traffic diversion because of construction work for a new Metro line.

Who doesn't love shopping in the central locality of Karol Bagh, which apart from being approachable from all sides of Delhi also offers everything to a buyer – from textiles to jewellery and from furnishing to electronic gadgets? For the same reason, the Karol Bagh market area is always choked with traffic jams. It may mar the pleasure achieved freshly with a retail therapy. The adjoining Faiz Road Crossing to Ajmal Khan Road Crossing leads to a chaos during peak hours. And, that is not all. Making the matters worse are unauthorised parking lots, which would not let you walk freely on the road.

The South Delhi locality, housing some of the premium malls in the national capital, is a shopper's delight. But that also means the locality and other areas nearby are always affected by massive traffic jams. Densely populated residential localities produce heavy traffic, while narrow lanes in the adjoining areas make it tough for it to move. If you are an officegoer with your workplace in central or southern localities of the city, you are likely to be delayed for work often.

The National Highway-8 stretch from the now-defunct Gurgaon toll to Dhaula Kuan, an intersection that sees movements towards all sides of the city, almost daily finds a mention on heavy traffic alert on FM radios. Also, media reports highlighting Delhi's traffic woes often carried pictures of the erstwhile toll booth to show the gravity of the issue. The toll plaza has now been removed, but that has done little to reduce traffic chaos; the wide highway leading a much, much wider highway stretch makes the spot where the toll plaza once existed prone to mishaps.

The Ashram Chowk intersection, an arterial road that connects East, Central and South Delhi, is a classic example of badly handled traffic movement in Delhi. The situation of the stretch between the Ashram Chowk to Maharani Bagh has worsened, owing to the ongoing Metro construction, constant road repairs and unauthorised roadside parking. A thought of passing through this stretch without getting stuck might be too ambitious a proposition.

This is another commercial hub in the middle of South Delhi that also has large residential colonies. Despite Metro connectivity and the rush it takes off the roads, you will seldom cross the area without sweating out. The unauthorised parking lots spread on the sides of narrow roads lead to great chaos at all times of the day.

The 3.3-km Vikas Marg stretch between Dayanand Vihar and Laxmi Nagar Mod is infamous for traffic signals with huge wait times. While it provides a lifeline to several colonies in East Delhi, the road's traffic chaos is multiplied by pedestrians and cycle-rickshaws. The chaos can also be attributed to the fact that Laxmi Nagar is a commercial, residential and educational hub of East Delhi.

If it's a bad day, it may take you more than one hour to cross this six-km stretch that connects North and Outer Delhi to the rest of the city and sees heavy movement of commercial and regular automobile. The area near the bus stand at GT Road becomes a scene of utter chaos with commercial and private vehicles vying with one another to pass through.

An Inter State Bus Terminus in north-central part of the city is sure to attract heavy traffic; the entry and exit points of buses getting in and out of the terminus, coupled with heavy pedestrian movement lead to utter chaos. This practically leaves no way for secondary transport. If you have to catch a Metro from the intersecting Kashmiri Gate Metro Station after getting off a bus, be sure to find a rush in Metro as well.

A major intersection of Outer Ring Road and National Highway-10, Peera Garhi Chowk at Paschim Vihar offers a resident many bus stops and a Metro station. The supply is indicative of the traffic demand. Heavy pedestrian movement, along with commercial traffic movement, wreaks havoc during peak hours and is better avoided. Land encroachment along the roads only worsen the overall situation.

With its narrow-busy turns and bustling parking lots, this 1.75-km Aurobindo Marg stretch tests a driver's patience during evening peak hours. Despite many attempts that saw several changes being made to the traffic management system, nothing much has been achieved so far. Vehicles moving towards Gurgaon further add to the traffic caused by the adjoining commercial and educational hubs.