The National Green Tribunal (NGT) has sought a report from the Delhi forest department on a plea, alleging felling of trees for the construction of the Dwarka Expressway without ensuring compensatory afforestation.

According to the a plea filed by a non-governmental body, the Society for Protection of Culture, Heritage, Environment, Traditions & Promotions of National Awareness, the Delhi government gave the National Highway Authority of India permission to fell 3,000 trees and transplant 3,500 trees, without ensuring compensatory afforestation.  Granting the department a month’s time to submit the report, the NGT posted for matter for hearing on November 6, 2019.

The government on March 6 had said all the hurdles in the completion of the much-delayed Dwarka Expressway had been cleared.

Since major hurdles in the way of the Dwarka Expressway are behind it, the National Highways Authority of India (NHAI) would soon be handed over an 18-kilometre stretch for development. According to media reports, the Haryana Shahari Vikas Pradhikaran (HSVP) will soon handover this land in favour of the Gurugram Metropolitan Development Authority (GMDA) through a mutation process. The GMDA will then handover the land to the NHAI.

Since “all obstacles have been removed”, the 29-kilometre Dwarka Expressway could be ready in another one-and-a-half year, says Gurugram Metropolitan Development Authority Chief Executive Officer V Umashankar. The project, aimed at decongesting the Delhi-Gurgaon highway, was stuck owing to land acquisition issues at New Palam Vihar and Kherki Daula.

Road Transport Minister Nitin Gadkari has announced that the National Highways Authority of India (NHAI) will begin work on the remaining eight-km long stretch of the 28-km long Dwarka Expressway in next three months. Of the total, the 18.1-km stretch is in Gurgaon while the remaining is in Delhi.

A key development in removing hurdles from completion of the Northern Peripheral Road or the Dwarka Expressway, the Haryana Urban Development Authority (HUDA) has handed over allotment letters of plots to as many as 61 oustees in New Palam Vihar. With this, the oustees will get possession of the plots in a week's time and will get six month's time vacate their current building.

In order to speed up the completion of the much-anticipated Dwarka Expressway, the homebuyers and investors in residential and commercial projects have moved the Punjab & Haryana High Court. For this, a civil writ petition was filed by DXP Welfare Association, a group of homebuyers and investors representing 20 projects, on February 16 against the HUDA, the NHAI and the Department of Town & Country Planning (DTCP), Haryana.

The Dwarka Expressway, a project which was proposed in 2009, had a deadline of March 31, 2012, but got delayed due to land acquisition issues. The expressway is an 29-km long stretch, 14 kms of which falls under Gurugram while the remaining under Delhi.

After getting the approval from the Haryana government to take up the rehabilitation of Dwarka Expressway oustees, the HUDA has said that the Gurgaon section of the road — from Kherki Daula to New Palam Vihar — will become operational by March 31. According to media reports, over 70,000 homebuyers have invested across the expressway. Once operational, the stretch will offer them better connectivity Delhi as well as Gurgaon.

The highway project, being built under the public-private partnership model, was expected to be completed by June 2017.

The Union Road Transport and Highways Ministry in March 2016 awarded the project the status of a highway, implying the Dwarka Expressway project falls in the ambit of the National Highways Authority of India (NHAI). With its new status, any conflicts on compensation are easier to get resolved, as a central agency is monitoring the progress.

To make the relocation process more lucrative, the Huda had earlier sped up the process to allot alternative housing sites to the residents of New Palam Vihar, Tekchand Nagar and Kherki Dhaula.

As these roadblocks are cleared, the price of properties around the stretch is expected see a high rate of appreciation. A mix of residential and commercial set-ups, the Dwarka Expressway has projects developed by leading players in the industry, such as DLF, Ansal, Adani, Emaar MGF, etc. Not only will the project cheer developers and home buyers, but the slump-hit real estate market in the National Capital Region is also seen getting a major boost with the completion of the Dwarka Expressway project. 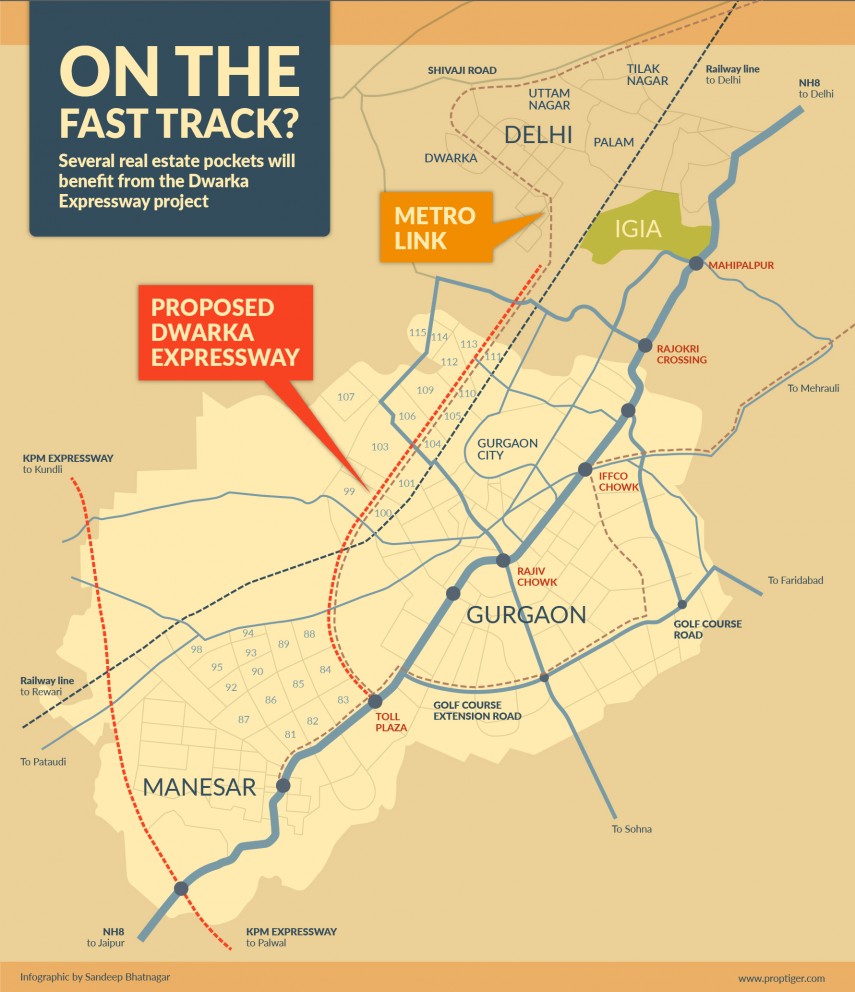