The state government is showing interest in making Bhopal an IT and software sector hub. (Photo credit: groovyganges.org)

Bhopal, the capital of Madhya Pradesh, is being considered as the best in terms of growth among the Tier II cities. As per data from National Housing Bank Index, Bhopal has shown the second best growth, driven partly by the real estate development in the city.

Here are some reasons why real estate in Bhopal holds promise:

1. Development & Demand: The state government is showing interest in making Bhopal an IT and software sector hub. It has also earmarked around 200 acres of land for it. The city already has a thriving manufacturing sector from electricals, electronics, pharma and the FMCG sector. This is in addition to the explosive growth of the power sector around the city and in the state of Madhya Pradesh. All this ensures that the city will see growth in population, hence increasing the demand for homes.

2. Education Hub: The city, which already has more than 70 engineering colleges and five medical colleges, is planning a few more to make it an education hub to rival Pune. That would ensure a regular influx of students, driving demand for rental housing. The state government has also earmarked 400 acres for educational institutions.

3. Real estate value: The capital value of the city's real estate has been growing steadily for the last six years. The growth rate is at around 15 percent. The steady growth is also a promise that the property rates will remain stable as there is no oversupply of properties like there is in Delhi NCR and Bangalore. Large developers like Unitech too have planned projects here to take advantage of the boom. The Bhopal realty market also has fair amount of investment options for those, who are buying property for non-residential purposes.

4. Affordable properties: There has been a growth in the price of land and property in Bhopal, especially in the affordable category.  Typically, one-bedroom apartments are priced at around Rs 8 lakhs. Two-bedroom properties cost anywhere between Rs 12 lakh to 25 lakh. The city also has five-bedroom villas available in the market for nearly Rs 1 crore, depending on the location.

5. Local developers: The biggest builder in the city is Ruchi Realty, which is part of a large industrial house based in Indore. Unitech is the only national real estate company that has a project in the city under its affordable brand Unihomes. DLF, Sahara and Ansal too are planning projects here but local builders like Signature Group and Fortune Builders still hold an upper hand in the market.

(Katya Naidu has been working as a business journalist for the last nine years, and has covered beats across banking, pharma, healthcare, telecom, technology, power, infrastructure, shipping and commodities) 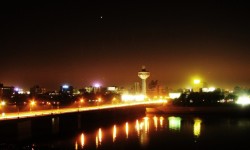 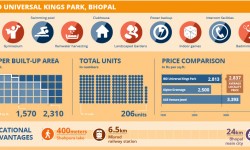 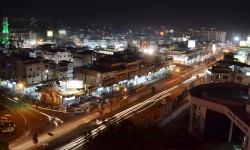