The festive joy had begun to raise the spirits of Indian real estate developers when Prime Minister Narendra Modi on November 8 rendered 86 per cent of the country's currency invalid with an aim to curb corruption and use of unaccounted money. While this corrective measure will gradually do the sector much good by making it transparent, it ended up upsetting real estate developers' apple cart in the short-term, data show.

According to a PropTiger DataLabs report for the third quarter (Q3) of the financial year 2016-16 (FY17), home sales across nine major cities declined 20 per cent over the previous quarter. This, the report says, is the highest fall in sales in the past 12 quarters. For some major cities, the fall was even steeper. Home sales in Gurgaon, Noida and Ahmedabad registered a quarterly decline between 30-40 per cent, says the report.

The nine cities included in the analysis are Ahmedabad, Bengaluru, Chennai, Gurgaon (including Bhiwadi, Dharuhera and Sohna), Hyderabad, Kolkata, Mumbai (including Navi Mumbai and Thane), Noida (including Greater Noida and Yamuna Expressway), and Pune.

In contrast with a 14 per cent quarterly increase in the second quarter of financial year 2016-17, new project launches across cities declined eight per cent in the quarter ending December. That affordable housing is gaining momentum is evident from the fact that 60 per cent of the overall new launches were in the below Rs 50 lakh category while 24 per cent launches were made in the below Rs 25-lakh price band.

However, those who expected prices to fall were left disappointed.

While property prices increased only marginally in most cities, cyber city Hyderabad saw an annual price increase of eight per cent in the December quarter.  However, buying property became cheaper considering home loan interest rates during the quarter came down by 50 basis points.

"Overall sentiment was negative during the quarter, with customers largely resorting to a wait-and-watch strategy in expectations of a steep fall in prices. Developers were focusing on their efforts to lure customers by offering freebies such as jewelry, electronic items, automobiles, holiday packages, etc. In addition, developers also offered price guarantee, rental assurance, subvention and buyback schemes to revive buyers' confidence," the report said.

However, presenting the Union Budget 2017-18, Finance Minister Arun Jaitley announced a slew of measures that would help the sector spring back to its feet by the second quarter of the coming financial year.

"The next few quarters may shed the dark clouds despite the temporary slowdown caused by the currency ban. Its impact is expected to fade as we move in the second quarter of FY18. The excess cash flow, a likely ease in the Reserve Bank of India's (RBI) liabilities and tax inflow on account of the income declaration scheme is expected to provide ammunition to the government to announce measures to boost investments and incentives to increase the demand for housing," says the report.

As more and more states implement the Real Estate (Regulation & Development) Act, 2016, prospective buyers' faith in the sector would be "re-instated", and fence-sitters will start looking for options, the report says, adding that developers will focus towards becoming more transparent. 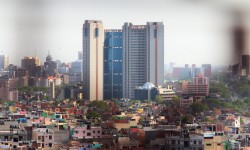 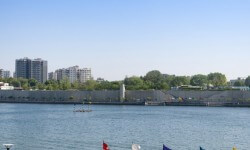