At A Glance: FSI In 10 Cities Of India

When compared to global cities, floor area ratio is much lower in major Indian cities. (Wikimedia)

Floor area ratio, also known as floor space index, is the ratio of the plot size on which the construction happens and the total permissible coverage area. This means that if a city allows an FAR of 2 in a particular area, you can build a coverage area of 2,000 sq ft on a 1,000 sq ft plot. The FSI limit differs from city to city, depending on development strategies.

Also Read: All You Need To Know About Floor Area Ratio

While many would argue to prove otherwise, there is only so much land that humans can develop to accommodate themselves. This is a reason why the whole concept of vertical growth came into being. Taller buildings in a city's centre gave more people the opportunity to enjoy everything that a city centre offers. As the world population grew by leaps and bounds, vertical growth became an essential part of urban planning, not only in city centres but also in the peripheries. To contain this growth, development authorities in cities came up with rules known as floor area ratio (FAR), or floor space index (FSI) norms.

PropGuide takes a look at the permissible floor area ratio in 10 major cities of India: 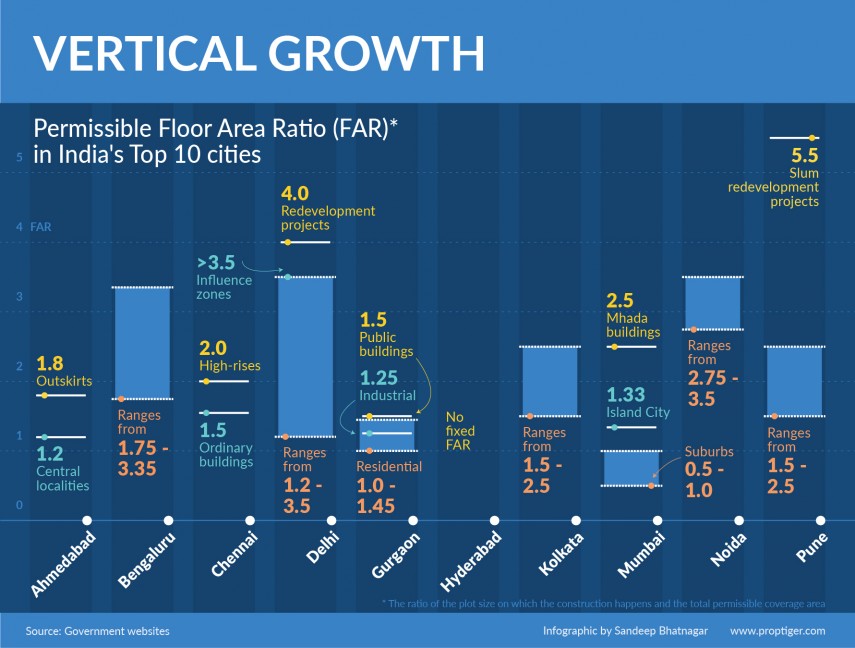 While the FAR is kept at 1.2 in central localities of Ahmedabad, it goes to as high as 1.8 on the city outskirts. When compared to other major cities, FAR limit in this Gujarat city, however, is much lower.

The vertical growth in Bangalore, India's information technology capital, has been kept between 1.75 and 3.35, depending on the area, plot size and road width. Localities in this Garden City are divided into three categories: intensely developed, moderately developed and sparsely developed. The city development authority has separate FAR norms for integrated townships.

In Chennai, FAR ranges between 1.5 and 2 under the Chennai Second Masterplan, 2026. For all ordinary buildings, the FSI is 1.5, while it is 2 for high-rises.

While the national capital has imposed no FAR restriction on group housing, FSI within the city is kept between 1.2 and 3.5 under the Delhi Master Plan 2021. Plots in the influence zones and Metro corridors of the city are allowed a higher FSI under the Master Plan. An FSI of 4 is allowed for redevelopment projects.

According to the Haryana Urban Development Authority's official website, while the permissible FAR ranges between 1 and 1.45, the maximum permissible floor area ratio for industrial setups is kept at 1.25. The FAR in public buildings is kept at 1.5.

The Telangana government has yet to put in place norms relating to vertical growth limit. This is the reason why there is no fixed FAR in Hitech city, Hyderabad.

Known for its ancient British Raj structures, 'City of Joy' Kolkata allows an FSI between 1.5 and 2.5 under the New Town Kolkata Building Rules, 2009. The varied limit applies depending on the land use, road width, density, etc.

The financial capital of India is divided in two parts, the island city and the suburbs. While the permissible FSI is 1.33 in the former part, it varies between 0.5 and 1 in the suburbs. For developing plots for the Maharashtra Housing and Area Development Authority (Mhada), FSI of 2.5 is allowed, and this may include other incentives, too, if it is a redevelopment project.

A city that has seen a huge migration over the past decade, a higher vertical growth is allowed when compared to the national capital. In Noida and Greater Noida, FAR ranges between 2.75 and 3.5.

Read More: Why Some Cities Are Known For Their Skyscrapers

According to the Draft Development Control Regulations for Development Plan Pune, the city allows FSI between 1.5 and 2.5, depending on various factors. A much higher FAR of 5.5 is permissible for slum redevelopment projects.