Indian Ministers Love To Park Their Money In Real Estate

Prime Minister Narendra Modi’s Council of Ministers went through a major reshuffle earlier this month. In the second reshuffle since the NDA government came to power in May 2014, 19 new minister were inducted. (Dreamstime)

A slowdown that has been shadowing India's real estate sector for the past couple of years has not been able to shake Indians' unwavering belief in property markets – be it the common man or ministers in the government.

According to an annual report by PropTiger Datalabs for the financial year 2015-16 (FY16), end users accounted for 97 per cent of the overall housing demand in the top nine cities of the country. That shows how the common man is driving the market in difficult times.

In the second major reshuffle of the Council of Ministers since the National Democratic Alliance (NDA) government took charge at the Centre in May 2014, Modi inducted 19 new faces as ministers on July 5. The number of the ministers at present stands at 76, including the prime minister. A look at the asset declaration of the new Union Council of Ministers shows how the drivers of the country's corridors of power reckon real estate as their preferred asset class. A little over 70 per cent of members of the Prime Minister Narendra Modi-led Council of Ministers have invested more than half their assets in real estate.

A detailed analysis of the declared assets of the ministers reveals some interesting facts about their real estate holdings. PropGuide lists a few of them:

As the finance minister, Arun Jaitley has attempted to usher in a new era of reforms in India's financial sector. His sound understanding of economics is also visible in his distribution of personal assets across classes. Not only is Jaitley the richest man in PM Modi's Council of Ministers, with Rs 113 crore of total assets, but his faith in real estate as an asset class is also revealed by the fact that he holds the largest real estate assets among the ministers in terms of value – worth Rs 75 crore. Jointly with his wife Sangeeta Jaitley, the finance minister owns residential properties across Delhi, Gurgaon, Gandhinagar and Amritsar, a plot in Faridabad, and a commercial space in Cyber Park Complex in Gurgaon. His residences in the national capital region include two houses in Delhi's posh Kailash Colony, a bungalow at the Todar Mal Road in central Delhi, an apartment in Aralia DLF Golf Link, and a plot each in Gandhinagar and Amritsar.

Modi has a rich Council of Ministers

The number of rich ministers in PM Modi's Council is quite high. As many as 18 ministers have more than Rs 10 crore of assets. And, only five of them are not crorepatis (with less than Rs 1 crore worth of total assets. The sum of the total assets of the 76 ministers comes to Rs 949.7 crore, or an average of Rs 12.5 crore per minister.

Among the 76 ministers in the government, at least 13 have invested more than Rs 10 crore in real estate. And their combined real estate assets are worth Rs 363.2 crore. With the total real estate holdings of all 76 ministers at a whopping 519.9 crore, the average real estate ownership among India's ministers comes to Rs 6.8 crore.

While 54 ministers in the Union government have real estate as more than half of their total assets, PM Modi, whose total assets stand at Rs 1.7 crore, has 60 per cent (Rs 1 core) parked in real estate. The average real estate holdings as a proportion of combined total assets for the 76 ministers comes to a handsome 54.7 per cent. 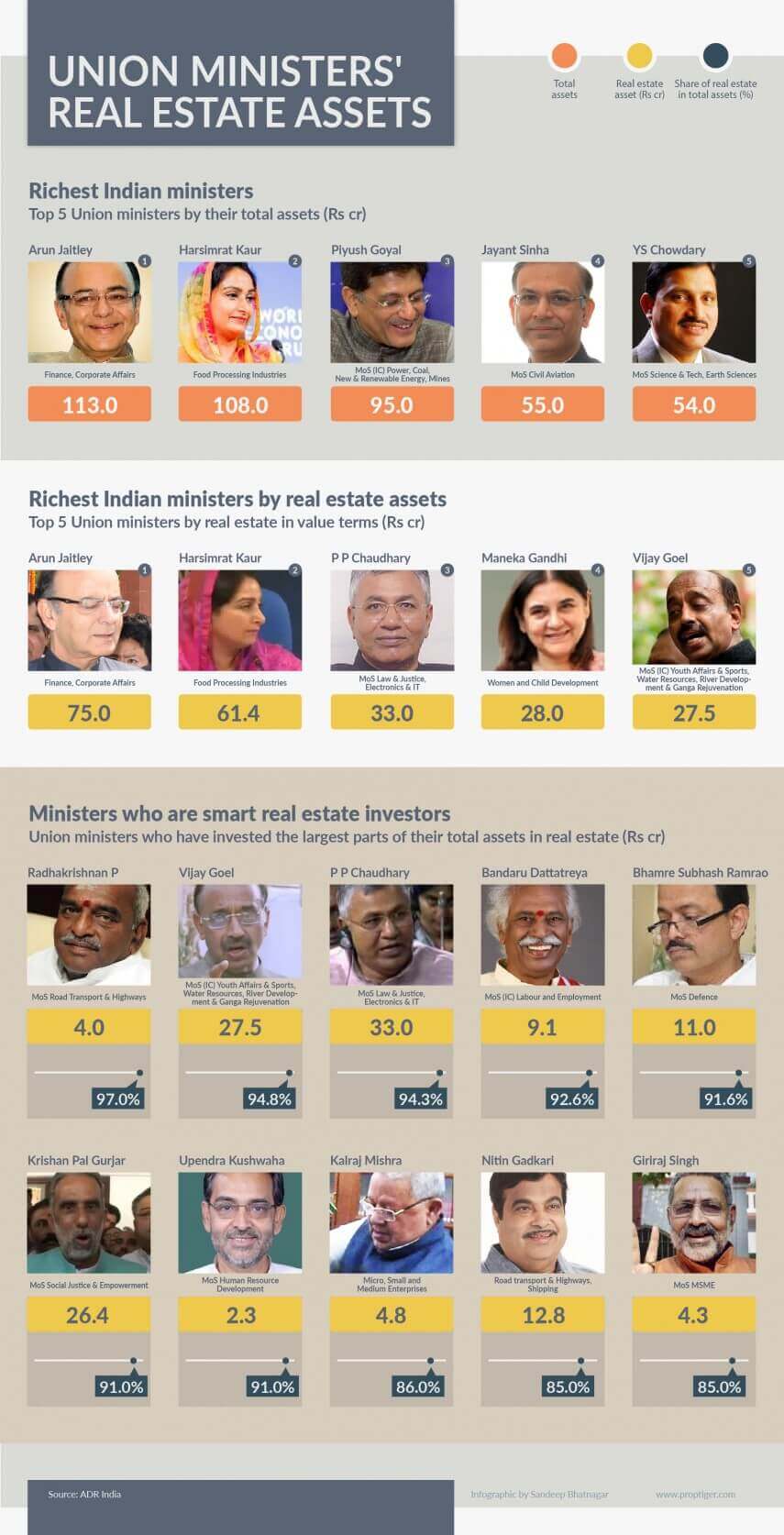