A major cause of property disputes for years has been the unclear land titles. Written records are poorly documented given that a plot of land passes many hands over the years and the lineage becomes difficult to track thereby causing problems between multiple, seemingly legal heirs and owners. Therefore, e-registration is a reformist move. The Land Registration Act of 2002 introduced this for the first time, replacing the traditional terms laid out in the previous Act of 1925. By 2015, e-registration was made mandatory.

Aadhar Card gets an edge over traditional means of verifying identity

According to latest reports, your Aadhar Card can now be linked to the e-registration sites of various authorities to confirm your identity and “also be used for certain transactions where the title of the property does not get transferred such as the leave and license agreement,” Ajay Bhushan Pandey, CEO, Unique Identification Authority of India (UIDAI) was quoted saying. Once linked, you no longer will have to visit the registrar to register your property, keep a tab or make changes to the property you own. It would be possible to get it registered from the comfort of your homes. As for the two witnesses required while you register your property, their biometric information can also be ascertained to make it transparent and convenient at the same time.

Also Read: Going To Register Your Property? Here Are The Sub-Registrar Offices Near You

Besides, reduced visits to the authority office, e-registration also paves way to store a tree of ownership records. If you were someone looking at engaging a broker just to do a background check of the property you are interested in, you can sit back, click your mouse to know the records. Aadhar information makes it imperative that all new buyers are directed to maintain clean records — a push towards transparency within the real estate sector.

However, wherever e-registration is already operational — states such as Chhattisgarh, Jharkhand, Karnataka, Kerala, Madhya Pradesh, Maharashtra, Punjab, Sikkim, West Bengal — these states would also need to proceed with Aadhar-linked registrations that could be facilitated post an amendment of Section 69 of the Land Registration Act of 2002.

Today, almost every Central government scheme is linked to the Aadhar card. From old age/disability/widow pension schemes to rural employment, Pradhan Mantri Awaas Yojana, to educational scholarships, cultural organisations, housing subsidies, industrial and manufacturing workers, and interest subsidy on home loan up to Rs 1 lakh etc. It is but natural that Aadhar should come up in a big way even in the real estate segment. In August 2015, the Supreme Court had directed that although Aadhar card was not mandatory to distribute Centre's schemes, it did allow government bodies to link the Aadhar number to the schemes and bank accounts.

Starting March 2019, those buying a property in Maharashtra would be able to register their properties with their Aadhar cards. The state cabinet has finally given its nod to the amendment in section 32A of the Registration Act, 1908. While those with Aadhar cards can register using it, those who do not, can continue with the old process which requires two witnesses during the property registration, confirmed Inspector-General of Registration, Supriya Karmarkar. According to estimates, over 7,000 property registration document reach the department every month and this development could reduce a lot of effort for  new homebuyers across the state.

As easy as it may sound, technology is not without challenges. Slow speed, connection breakdown was an issue that Madhya Pradesh-based homebuyers had to face after e-registrations were made mandatory. Any jolt to the system meant long waiting hours and longer queues the next day.

Note : The letter directing land records to be linked to Aadhar Cards, attributed to the Cabinet Secretariat on the 15th of June, 2017 is fake, claims the government. Here is the announcement sourced from Twitter: 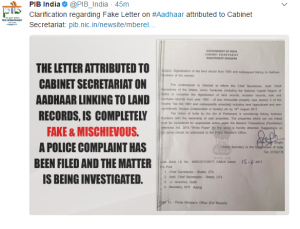 There have been announcements throughout the year asking citizens to link their Aadhaar number. There were also rumours regarding mandatory  linkage with property transactions, too. Rumours sparked yet again when Union Housing Minister Hardeep Puri in a TV interview said, "seeding Aadhaar to property transaction is a great idea but I'm not going to make an announcement on that. We are already linking Aadhaar to bank accounts, etc, and we can take some additional steps for property market also”.

Prime Minister Narendra Modi was also heard emphasising the importance of Aadhaar and how it has acted as a 'big weapon' in eradicating black money and ensuring transparency.

Although there has been no official announcement on linking your property with Aaddhar yet, PropGuide reached out to Ashok Mohanani, vice-president, NAREDCO (W) and chairman, Ekta World to understand what would be the impact if it is made necessary.

Mammen: Should property transactions be linked to Aadhaar?

Mohanani: Real estate was said to be a sector that is pumped with black money on a large scale, in both residential and commercial properties. The effect of demonetisation has helped to clear out the black money from the sector as much as possible. If Aadhaar is linked with property transactions, the government would be able to take a step ahead to bring in absolute transparency within the sector.

The real estate law makes it mandatory for every developer to be registered on the website in order to conduct their transactions, it is only right to add the Unique Identification Number to the same since it will help to further clean the system. By linking Aadhaar to properties, the government can monitor the property transaction between two parties and curb registration of properties under others' names and this would also help in curbing the benami properties.

Mammen: Would such a move further slowdown the industry?

Mohanani: With the real estate law, all properties now need to be registered and hence, linking of Aadhaar will only simplify the process further. The other advantage of linking real estate transactions with Aadhaar is to encourage digital transactions of land record under the Digital India Land Records Modernization program (DILRMP). Hence, it will help to fasten the growth within the sector by making the processes quick. It is definitely a step ahead in the right direction. The industry is process- and result-driven and crucial policy changes are positively enhancing the image of the real estate sector.

Plausible setbacks if Aadhar linkage is made mandatory:

*It is said that just like demonetisation that affected the secondary market, mandatory linkage of Aadhar may hit the secondary sales yet again.

*It could also give rise to issues in case of an inability of a person to link their UID due to any specific reason.