The Benami Transactions (Prohibition) Amendment Act, 2016, came into effect on November 1. Designed to curb unaccounted money, the new law provides for up to seven years' imprisonment and fine for those indulging in benami transactions. The benami property refers to property purchased by a person in the name of some other person. Under the Act, properties held benami are liable for confiscation by the government, without payment of compensation.

The Madras High Court has issued a contempt notice to Chennai Metropolitan Development Authority officials for disobeying its July 18 order over holding meetings and framing rules on issues related to 'regularisaton' of buildings in the state capital. A PIL had challenged gross violations of building byelaws in the garb of regularisation schemes by the urban body.

As part of its festive scheme, India's largest public sector bank, State Bank of India (SBI), has cut home loan rates to 9.1 per cent, the lowest in six years. For loans with women as co-borrowers, loans would be available at 9.1 per cent while it would be 9.15 for others. In addition to this, the bank has waived the processing fees. 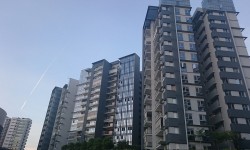 #WeeklyNewsRoundup: In A First, Huda To Auction Residential Plots