The Delhi Development Authority's new housing scheme is likely to be launched soon after the conclusion of the municipal polls on April 23. Most of the 12,000 flats on offer are spread across localities of Rohini, Dwarka, Narela, Vasant Kunj and Jasola.

A consortium of lenders, led by State Bank of India, has finally managed to sell the Kingfisher Villa in Goa, previously owned by businessman Vijay Mallya, for Rs 73.01 crore. Banks failed to find a buyer for the property thrice while they attempted to sell the villa to recover dues from trouble-hit Mallya. Movie production company Viiking Media & Entertainment, owned by actor-producer Sachiin Joshi, bought the villa in a private deal, say media reports.

The Prime Minister's Office (PMO) has called a meeting to review the government's affordable housing programme as it targets to achieve the Housing for All by 2022 target. The PMO has called members from real estate developers' bodies CREDAI and NAREDCO to understand the problems faced by developers in launching affordable housing projects. Meanwhile, Urban Development and Housing Minister M Venkaiah Naidu launched around two lakh affordable housing units in a function organised by CREDAI in Ahmedabad.

The Lok Sabha has granted ninth extension to the Joint Committee on the contentious Land Bill, extending the deadline for it to submit report till the last day of the first week of the Winter Session. Earlier, the government withdrew the Right to Fair Compensation and Transparency in Land Acquisition, Rehabilitation and Resettlement (Second Amendment) as it was criticised for being anti-farmer, and sent it to a parliamentary committee for a review. 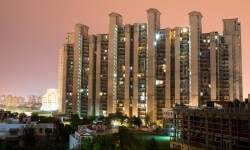