The Maharashtra Real Estate Regulatory Authority (MahaRERA) is planning to take strict action against developers whose ongoing projects would remain unregistered even after September 1. The regulator has received 12,700 applications for registration of ongoing projects in the state. Of these, the authority have already processed and registered 8,000 projects. From September 1, information on all these registered projects will be available on the MahaRERA portal.

The insolvency resolution professional (IRP) for Jaypee Infratech will shortly start giving possession of flats built by Jaypee. The IRP had earlier indicated it was going to pursue construction of projects to ensure the interests of 25,000-30,000 individuals, who are waiting for their homes for several years, are not affected by the insolvency proceedings initiated by IDBI Bank at the behest of the Reserve Bank of India.

The Telangana government is going to spend Rs 10,000 crore on improving infrastructure in the city in the next few years. Tenders for various flyovers and junction improvements have already been taken up. Works on two major flyovers, from JBS to Thumkunta and Paradise to Kompally, would begin at a cost of Rs 2,000 crore after clearances from the defence department are obtained. 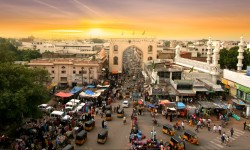 Hyderabad Realty: Will it gain its lost glory?

Will Hyderabad be the most preferred investment destination in 2015?