The Niti Aayog has said that the Centre should work with states to lower stamp duty charges to check use of unaccounted money in real estate sector. The government think-tank has recommended providing compensation in case of revenue loss to states due to reduction in stamp duty. It has also told the government to expedite the process to release land caught in litigation due to archaic urban land ceiling Act.

Jaypee Wish Town homebuyers have kept the plan to move to the Supreme Court on hold, and are banking on the corporate insolvency resolution process for getting their units delivered. The Supreme Court last week had asked buyers to join the plea against Jaypee Infratech.

The Income-Tax Department has released a detailed statement against tax evaders after demonetisation. The statement said that more than Rs 14,000 crore worth of properties have come under the scanner of the department. The exercise has also unearthed a large number of persons and clusters having suspect transactions.

***
In relief to thousands of Amrapali homebuyers, the three-member panel formed by the UP government to resolve the dispute has said that co-developers will be roped in to complete the delayed projects. The panel has given Amrapali one month to start the construction of projects and two years to complete them. 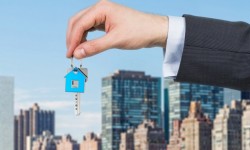