The Gautam Budh District Administration has decided to leave circle rates — the average rate below which a property cannot be sold/purchased — unchanged. However, the administration has offered relief to homebuyers through a rebate on the surcharge on common facilities- —the surcharge on common facilities in group housing societies has been brought down by up to nine per cent.

In a move that would come as a major relief for those who live in highrises, the Uttar Pradesh Power Department has decided to provide individual electricity connections by March next year. This means developers will have to install separate power connections in each dwelling unit of a housing project.

In a survey by leading global real estate advisor, Delhi’s Connaught Place has been positioned as the ninth most expensive office location in the world. Annual rent in Delhi's central business district is Rs 10,554 per square foot (sqft). Mumbai’s Bandra-Kurla Complex (BKC) stands at 26th position in the list, with an annual rent of Rs 6,646 psf. The city's central business district Nariman Point stands at the 37th position in the list, with Rs 5,013 psf as annual rent.

The NITI Aayog has proposed a 15-point action plan for combating air pollution in India’s 10 most polluted cities in the country. The draft action plan, titled Breathe India, talks about encouraging electric vehicles, phasing out private diesel vehicle and development of crop residue utilisation policy to control pollution. According to a recent WHO database (2018), Kanpur, Faridabad, Gaya, Varanasi, Agra, Gurgaon, Muzaffarpur, Lucknow and Patna are the 10 most polluted cities in India. 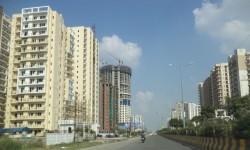