National Green Tribunal has issued notices to the Union Ministry of Environment, Delhi and Haryana state governments, the municipal corporation of Gurugram, Ansal Properties and Infrastructure and others on the construction of apartments located in the eco-sensitive Aravalli area. The tribunal is hearing a plea that claims that there has been an encroachment and construction on 'Khasra no 75', which is a designated hilly land unfit for cultivation. The land belongs to the Haryana state government.

In a relief to around 21,000 allottees, the Yamuna Expressway Industrial Development Authority has waived off the penal interest for allottees who have paid 75 per cent of the cost of the plots allotted to them under the 2009 scheme. Moreover, the interest on the installments has also been reduced from 12 per cent to 10.65 per cent. The allottees under the 2009 plot scheme could not get possession due to farmer agitations despite repeated assurances by the Authority.

The Indian operations of the US-based online retail giant Amazon has leased six lakh square feet of office space in Hyderabad for a rent of Rs 54 per sq ft. This makes it one of the largest office space deals this year. The office space is located at Phoenix Group's under-construction property in Madhapur suburb of Hyderabad. In the first phase, Amazon will occupy 250,000 sq ft and will later expand to the six-lakh-sq-ft mark over the next one and a half years. 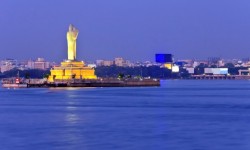 How Hyderabad Is Upgrading Itself To Become A Better City