The Union Cabinet is likely to give its formal approval to the Noida Metro project, which is in the advanced stages of construction and is expected to get operation by 2017 end. The Cabinet approval will pave the way for the release of Rs 1,000 crore for the project.

The Haryana government has signed five agreements with Singapore-based companies to attract a Rs 18,000- crore investment in development projects in infrastructure and industrial sectors. The MoUs are for developing aviation hubs, smart cities and industrial townships.

The government is planning to construct affordable homes made of steel that can easily be built at a nominal Rs 2 lakh under the Pradhan Mantri Awas Yojna. The allocation under the scheme is Rs 1.5 lakh, while the same for hilly states is Rs 1.6 lakh.

Also Read: Why PMAY Didn't Take Off In Maharashtra

Also Read: Why India Does Not Have Many Private Cities Like Lavasa #RealtyNewsRoundup: Govt Set To Roll Out Pradhan Mantri Awas Yojna-Gramin; Beneficiaries To Be Unveiled On April 24 PMAY Is Useful For You Even If Your Parents Own A Home. Here's How. 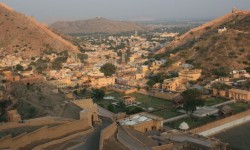