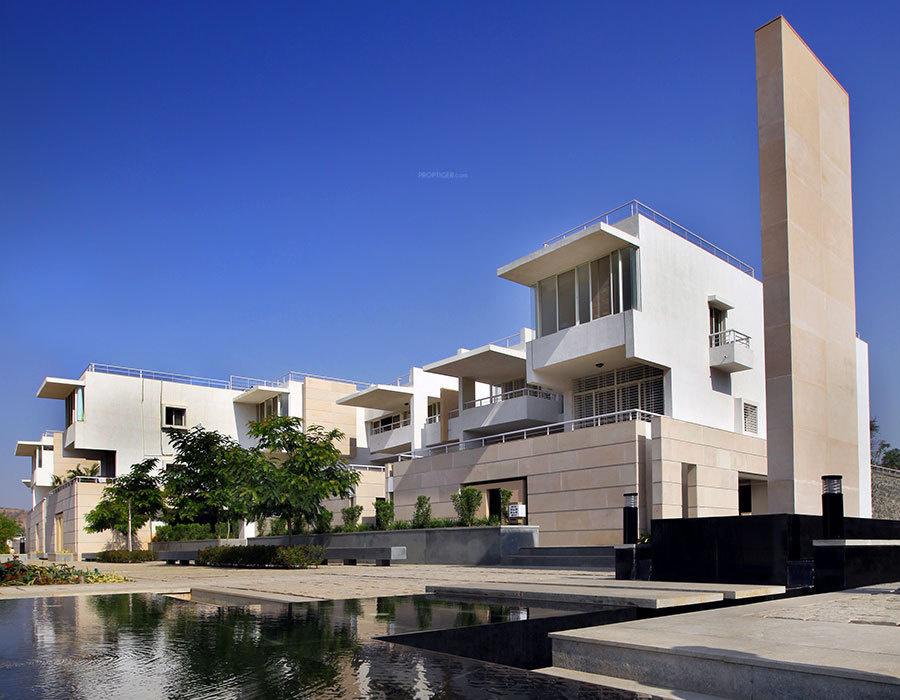 Comfortably nestled at the picturesque locale of Bavdhan in Pune - Rohan Madhuban - a meticulously designed and constructed residential property, is tucked away from the chaos of the main city. In order to give potential residents a sense of openness, this residential enclave, which was launched in April 2005, is built on a slope in a terraced structure. All of these completed and already handed over for possession (in June 2007) villas are built like twin bungalows with 4 bedrooms each and doub... END_OF_DOCUMENT_TOKEN_TO_BE_REPLACED

Comfortably nestled at the picturesque locale of Bavdhan in Pune - Rohan Madhuban - a meticulously designed and constructed residential property, is tucked away from the chaos of the main city. In order to give potential residents a sense of openness, this residential enclave, which was launched in April 2005, is built on a slope in a terraced structure. All of these completed and already handed over for possession (in June 2007) villas are built like twin bungalows with 4 bedrooms each and double height living areas. The ready to move-in abode features large spacious rooms, sprawled over super built-up area sized at 5,100 square feet, wherein every square inch is designed after proper planning and thought. These diligently constructed 42 launched villas - positioned conveniently in the popular residential hub of Pune - feature uncompromising space for all. Born out of the companys innovative concept of PLUS Homes - where PLUS stands for Perfect Ventilation, Lively Light, Utmost Privacy, and Smart Space - Rohan Madhuban brings together the best of innovation and architectural expertise in each of its homes.
The essence of community living is captured beautifully in this project - a central space has been created within the built mass to serve as an extended area for all units; vehicular movement has been restricted thus creating a safe internal pedestrian street; double height terraces have been introduced to provide a distinctive look to the facade; each unit has been provided with utmost privacy through strategic planning; and all villas are equipped with balconies to furnish magnificent views of the green surroundings.
At Rohan Madhuban room dimensions and placement have been thoughtfully planned. There are no obstructive pillars, narrow corridors, or corners that cannot be used providing seamless harmony in between the rooms. Even the guest bedrooms and powder rooms are segregated from main bedrooms for more privacy. Fresh air and natural ventilation are the most crucial aspects of these villas. Regular passage of air ensures better health by controlling impurities viz. bacteria, dust, unpleasant odour, & moisture content, and also prevents condensation, thus avoiding moulding & rotting of furniture. These naturally lit homes, with no dark corners, offer generous sunlight, which in turn helps to save on electricity, day after day.
These villas - with not even a stretch of unwanted space or a piece of meaningless design - have brought along many community amenities such as landscaped garden with innovative features, swimming pool with paved deck, kids pool, multipurpose hall with indoor games, well equipped gymnasium, badminton court, guest rooms, and more. In order to bring functionality and aesthetics to every aspect of the home automatic lifts with power backup, 100% power backup for common utilities, sanitation facilities for domestic workers & drivers, drip/sprinkler irrigation for landscaping, Seismic resistant structure design, video door phone & intercom in each unit, and CCTV in common area, have been provided.
Founded in the year 1993, the famed Rohan Builders and Developers, aims at building a healthier living space for city dwellers. Over the years, the company has employed several architectural innovations and topography-inspired designs in order to create homes offering a perfect union of nature and engineering. Headquartered in Pune, Rohan Builders and Developers is a leading real estate development company with a construction portfolio of residential, commercial as well as infrastructural properties. Starting as a modest but strong, multi-disciplinary organization, with diverse interests in infrastructure development, industrial construction, and real estate development, the group has received numerous awards and accolades such as AESA Kumar Award 2013, HSE Award, Cityscape Award, CNBC Awaaz CRISIL Credai Awards, and BAI Awards. With real estate operations spanning across Pune and Bangalore, the company has also received DA2 CRISIL rating for Real Estate Development signifying its commitment towards delivering quality products.
Bavdhan, a suburb in Pune - located off the Mumbai-Bangalore Highway by-passing Pune - has been steadily growing as a residential hub mostly since the last decade. Bavdhan Road serves as the main approach road for Mumbai-Pune Expressway and Chandani Chowk. This area is well connected through other roads to Paud Road, Baner, Pashan, University Circle, and Sus village. The railway station is located approximately 10 km away and the airport about 15 km away from here. Strategically located on NDA Road - the centre of Aundh & Kothrud - the area is easily accessible from Mumbai as well the main city. Also, the Hinjenwadi IT Park is just a 20 minutes ride away via the Highway from Bhavdhan.
Through masterly planned layouts, Rohan Builders and Developers has developed an exclusive creation where residents not only find just world class amenities or mind-blowing features, but also a unique world where space is at its best form ever! END_OF_DOCUMENT_TOKEN_TO_BE_REPLACED

NRIs ask this frequently
Have any unanswered questions ?click here

About Rohan Builders And Developers

Established in the year 1993, Rohan Group is a leading real estate developer headquartered in Pune. Mr. Suhas Lunkad is the Chairman and Managing Director of the company, while Sanjay Lunkad, Milind Lunkad, Bharat Desadle, Deepak Bhatewara and Vinay Shrishrimal are the Directors of the company. The construction portfolio of the company includes construction of residential, commercial as well as the infrastructural properties. Top Rohan Garden Projects: Rohan Garden in Kothrud, Pune comprising 1... END_OF_DOCUMENT_TOKEN_TO_BE_REPLACED
Similar Projects

The information and data published herein with respect to this Project are collected from publicly available sources. PropTiger.com does not validate or confirm the veracity of the information or guarantee its authenticity or the compliance of the Project with applicable law in particular the Real Estate (Regulation and Development) Act, 2016 (“Act”).  END_OF_DOCUMENT_TOKEN_TO_BE_REPLACED

Copyright © 2015 proptiger.com
PropTiger.com shall neither be responsible nor liable for any inaccuracy in the information provided here and therefore the customers are requested to independently validate the information from the respective developers before making their decisions related to properties displayed here. PropTiger.com, its directors, employees, agents and other representatives shall not be liable for any action taken, cost / expenses / losses incurred, by you.  END_OF_DOCUMENT_TOKEN_TO_BE_REPLACED

Thank you for sharing your details!
We regret for currently not serving in Pune.
However we can share your details with the property agents on makaan.com

See other project in Pune

Thank you for submitting your interest. We'll get back to you shortly.
Error while submitting