Considering Property Purchase In Greater Noida? 5 Points You Should Take Note Of

Greater Noida has emerged as a destination of choice for the investors. Recent developments within the real estate market herein have been the cause. One of the most affordable hotbeds for an investment, in the next five to seven years, almost five lakh new residents are expected to call Greater Noida their home. If you are keen to invest here, know the following:

In a recent meeting held by Uttar Pradesh Chief Minister Yogi Adityanath with top administrators, the CM directed developers of 70 group housing societies across Noida and Greater Noida to complete 50,000 units within the next two months. These projects are 'almost complete' as reports claim but haven't received their completion certificate owing to dues payable to the concerned authority.

More flats to be delivered

The Greater Noida Industrial Development Authority (GNIDA) directed real estate developers to speed up the completion of their projects that are homes to 2,500 homebuyers. There are 31 such ongoing apartment projects that have been asked to handover possession within a week. Projects such as Jyotirmay, Earthcon, Habitech, Nirala and Ajnara are scheduled to be completed within this week. Another 25 developers have requested GNIDA for 20 days to two months of time to chalk out a roadmap towards possession.

Also read: Are You A Property Broker From Greater Noida? Close Deals In These Ready-To-Move In Zones

The period during which construction work is halted owing to some unforeseen circumstance, triggered by the decision of a government body or development authority, and when the interest payable to such a body is waived is termed as zero period. You may want to read about it here.  Recently, the Greater Noida Authority formed a committee to study the demand of developers of 41 projects who were demanding zero period from 2011-2015. These developers have maintained that their work was affected due to farmers' protest and related litigations. The Authority is trying to verify genuine cases. Factsheets would be scrutinised and would be analysed by either the state government or the chief executive officer of the Authority. If the zero period is awarded, developers will be able to pass on the benefits to homebuyers.

Change in land allotment is possible

The Greater Noida Authority is keen on changing its land allotment policy. A decision would be taken post a meeting scheduled on September 20 where the Board will decide. If the change is brought about, allottees would have to pay 10 per cent of the land cost at the time of property registration and 20 per cent after the allotment. The rest of the money would be collected over seven years and in 14 installments. As of now, developers in Greater Noida have to pay just five per cent during registration and five per cent after allotment. The balance is collected over 12 years.

Also read: Looking For Property In Noida? It Just Got Cheaper

Come April 2018 and real estate along the Metro corridors besides connectivity in such areas will get a new high. The Delhi Metro would be extending its services to the Greater Noida region. The 29.70-km Aqua Link will have 21 stations with six stations in Greater Noida. The new Metro link would go under the Western Dedicated Freight Corridor and also cross the Delhi-Agra Yamuna Expressway near the Knowledge Park II Metro station, which would be connected to the Greater Noida Expo Centre and Special Economic Zone through walkalators. 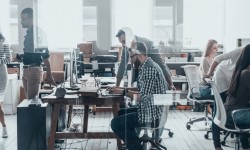 Noida Leaves Gurgaon Behind; May See 50% Of New Office Supply